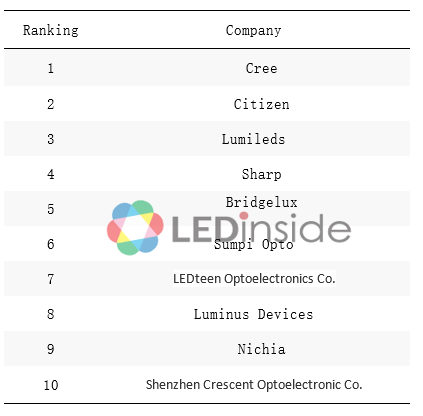 Citizen is the leading manufacturer in COB LED market around the world. However, ever since Cree launched its COB lineup in Chinese market, the company’s market share continued to climb as it took advantage of existing distribution channels and the competiveness of its products. Cree topped the global COB LED manufacturer rankings in 2015. Due to fierce market competition, the revenue growth of Citizen’s products slowed down in Chinese market but remained at a relatively high market share in high-end market.Ever since Lumileds released COB products in 2013, the company saw rapid development in commercial lighting market. Lumileds climbed to the third place in the 2015 COB LED manufacturer rankings. The company largely expanded its COB production line recently and it’s expected that it will witness rapid growth in revenue income as of 2016.Both Sharp and Bridgelux saw declining revenue income as other Chinese manufacturers and international manufacturers gained market share.Sunpu Opto has been the leading Chinese COB LED manufacturer. The company entered COB LED market ever since it was founded and has been in leading position in terms of brand, technology and production capacity scale. In 2016, the company introduced dual color temperature COB LED that captured the industry’s attention. Meanwhile, Sunpu Opto also provided special lighting applications, including COB LEDs for horticultural lighting.Guangzhou LEDteen Optoelectronics Co. focuses on COB LED market ever since it was founded. The company saw rapid growth over the past few years. In 2016, Guangzhou LEDteen Optoelectronics launched high-density, high CRI products that boost its competitiveness in high-end commercial lighting market. Luminus Devices mainly positions itself in high-end commercial lighting applications. The company was acquired by San’an Opto in 2013. It currently constructs a manufacturing base in Xiamen to scale up production capacity. Therefore, it’s expected to see Luminus Devices’ growth in sales revenue scale in the near future.Nichia introduces COB products to Chinese market for a short period of time only but has since witnessed rapid growth. In 2016, the company’s market share saw rapid increase thanks to its high price-performance products. It’s projected that the company will see exponential growth in sales revenue.Shenzhen Crescent Optoelectronic mainly manufactures high-power LED packages, including COB and other high-power LED products and that it has been accumulating experience in specific market segment. In 2015, the company’s COB LED revenue income ranked the tenth.More News & Info:
Low price is not equal to low-end.

Which Cree LED we use?