German-based lighting manufacturer OSRAM has agreed to sell its lamp business unit LEDVANCE to a Chinese consortium that is led by IDG Capital Partners and includes LED manufacturer MLS and Yiwu State-Owned Assets Operation Center. The sale was announced on July 26 and represents a landmark deal in which Chinese LED manufacturer successfully acquires an oversea target with the help of an international investment group. “The sale of LEDVANCE shows major international lighting companies are exiting the LED lighting business due to its unprofitable outlook,” said Roger Chu, research director of LEDinside, a division of TrendForce. “On the other hand, Chinese LED lighting companies have an overall cost advantage and are assisted by the government, so they can take this opportunity to expand their market shares.” The LED lighting penetration rate in the worldwide general lighting market grew to 31% in 2015. Despite the increasing penetration, the competition among vendors has become so intense that many major international brands are forced to abandon their lighting businesses that they have owned for many years. According to LEDinside, OSRAM’s revenue for 2015 totaled US$6.1 billion. Excluding sales related to automotive and specialty lighting applications, the annual revenue – derived mainly from sales related to light sources and lighting luminaires – was around US$3.2 billion, or 3.8% of the entire general lighting market last year. In terms of ranking, OSRAM was also the second-largest brand in the general lighting market for 2015 by revenue.“OSRAM’s share in the general lighting market will drop sharply following the sale of LEDVANCE,” said Chu. “However, the company can now focus on developing businesses with high-margin potentials, such as LED components, automotive and specialty lighting applications. The deal is also an indication that major lighting brands are pursuing high value-added activities instead of coveting as much market shares as possible.”The sale of LEDVANCE is accompanied by a strategic alliance agreement between OSRAM and MLS.Specifically, MLS will begin purchasing large volumes of LED chips from OSRAM’s plant in Malaysia starting next year. “OSRAM has traded its light source business for guaranteed orders for its LED chips,” noted Chu. “At the same time, MLS through LEDVANCE has gained access to OSRAM’s patented LED chips and the brand name of OSRAM/Sylvania. The Chinese LED manufacturer can combine these benefits with its existing cost advantage in LED packaging and make a strong push into the lighting business. By doing so, MLS will also help accelerate the global expansion of Chinese lighting vendors. On the whole, the deal is a win for all parties involved." 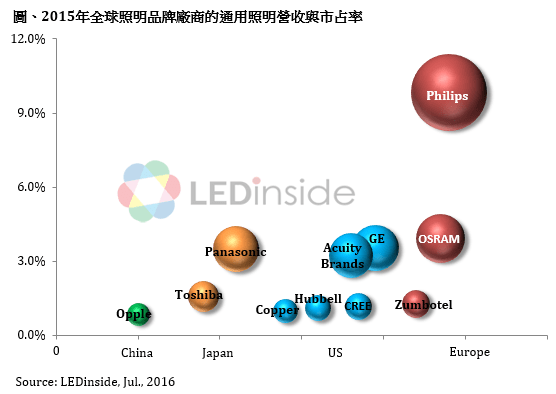