Osram is Demonstrating Phaser Laser Technology for the Entertainment Sector

Ultra powerful laser technologyAt Prolight + Sound Osram is presenting its phaser laser technology for the first time with a luminous flux of up to 18,000 lumen (lm). Phaser is a compound of phosphor and laser. It will enable lighting solutions in future to offer the maximum available luminance. In developing phaser technology Osram was able call on its extensive know-how from the automotive and medical sectors. In 2014 Osram received the internationally renowned R&D 100 Award for the development of the Itos Phaser 3000, the first LED/laser-based white light module. Innovative LARP technology (Laser Activated Remote Phosphor), which was developed for automotive applications, has been on the roads also since 2014 as laser front lighting on various series models. Now this technology is being used in the entertainment sector for the first time. It offers very high illuminance levels, previously unattainable with LED light sources. The long life also leads to low maintenance costs and high luminaire reliability. Initial application-specific pilot projects, which can be seen at the fair, are being implemented with an external OEM partner and also internally at Osram. 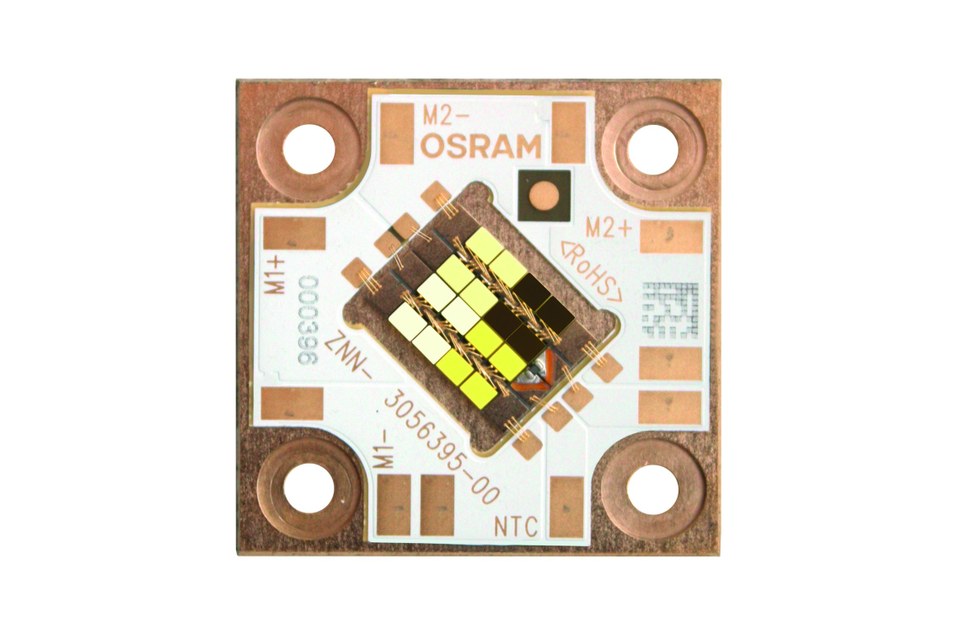 Lok-it! Power Series: The right spotlight lamp for every applicationAs the range of applications for spotlights continues to expand and therefore their performance requirements increase, Osram has given the Lok-it! Power Series a technical facelift and developed more powerful versions, of which the following are being presented at Prolight + Sound: the two improved standard versions Lok-it! 1000/PS and Lok-it! 1700/PS, Lok-it! 1000/PS Brilliant and Lok-it! 1400/PS Brilliant with a color rendering index (CRI) of 95. Also in the series are the Lok-it! 1000/PS Blue with a color temperature of 7500 kelvin (K) and the imminently available Lok-it! 1000/PS Beam with a shorter arc spacing. On all new models a special lamp filling reduces the green tone usually seen with metal halide lamps and ensures a balanced spectrum. With their CRI of more than 90, the lamps provide optimum light quality and natural color rendering. What's more, their ceramic bases make them resistant to high ignition voltages of up to 35 kilovolts (kV). The compact dimensions and a shorter arc distance means the new version of the Lok-it! Power Series results in smaller and brighter solutions.A newcomer to the SplitStar family: multi-channel LED module S32 RGBWAnother innovation from Osram is its S32 RGBW multi-channel LED module featuring high luminance in combination with high luminous flux. The module is based on particularly densely arranged LED chips in red, green, blue and white which can be individually controlled and can be operated at up to 5 amps (A) thanks to a low overall thermal resistance of 0.2 kelvin/watt (K/W). A very large amount of light is therefore produced from a small area. The option of integrated temperature-controlled monitoring by means of NTC (Negative Temperature Coefficient) ensures constant and reliable output. The SplitStar S32 RGBW is suitable for stage spotlights, architectural lighting and effect lighting.New Kreios LED spotlights with high output and compact designWith their high light output the highly efficient Kreios Fresnel and Kreios Profile LED spotlights provide excellent performance, particularly on small to medium-size stages. Their flickerfree and infinitely dimmable light makes them the perfect spotlights for events where many different light settings are needed. The zoom range of the Fresnel is between 14 and 77 degrees, and that of the Profile is between 20 and 36 degrees. Thanks to their compact design the LED spotlights are also particularly suitable for use at different event locations. The Kreios Fresnel and the Kreios Profile have been available since the start of 2016.Sirius HRI family: reflector lamps with high luminance for moving headsAt Prolight + Sound, Osram is presenting three new members of the Sirius HRI family: Sirius HRI 100W, 440W and 580W Brilliant. In addition to the three latest models, the powerful metal halide lamps are also available as Sirius HRI 132W, 140W RO, 190W+, 230W, 280W, 330W, 330W XL and 330W X8. Thanks to their compact and light design, the reflector lamps can be used in moving heads. The very short arc of the Sirius HRIs provides high luminance and constant light output throughout their entire lives. Sirius HRIs are supplied as a complete system including electronic control gear.ABOUT OSRAMOSRAM, based in Munich, is a globally leading lighting manufacturer with a history dating back more than 100 years. The portfolio ranges from high-tech applications based on semiconductor technology, such as infrared or laser lighting, to smart and connected lighting solutions in buildings and cities. OSRAM had around 33,000 employees worldwide at the end of fiscal 2015 (September 30) and generated revenue of almost €5.6 billion in that fiscal year. The company is listed on the stock exchanges in Frankfurt and Munich (ISIN: DE000LED4000; WKN: LED 400; trading symbol: OSR). Additional information can be found at www.osram.com.