Home  > Knowledge  >  Which Country Has the Best LED Policy Among Japan, India, and Malaysia?

Which Country Has the Best LED Policy Among Japan, India, and Malaysia?

In recent years, countries around the world are becoming increasingly concerned with energy and environmental issues, which is closely tied with human survival. Low carbon economy has become a very popular global issue. LED lighting’s high reliability, low energy consumption, long lifetime, low pollution, and high quake resilience has made it a globally recognized energy efficient and environmental product. Driven by large market potentials and a positive industry outlook, many countries have launched industry development policies to spur rapid growth in the LED industry. After all these years, which country incentives spurred the proliferation of LEDs? LEDinside will be focusing on LED policies in Japan, India and Malaysia’s.Japan

The Japanese government has been known for interference in the economy through flexible policies, which it has also applied in the LED industry. Japan began promoting its semiconductor lighting technology as early as 1998 with its “21st Century Lighting Project,” and is considered one of the earliest countries to initiate LED industry policies. 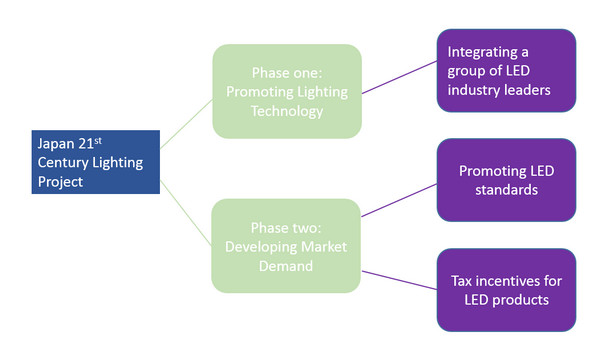 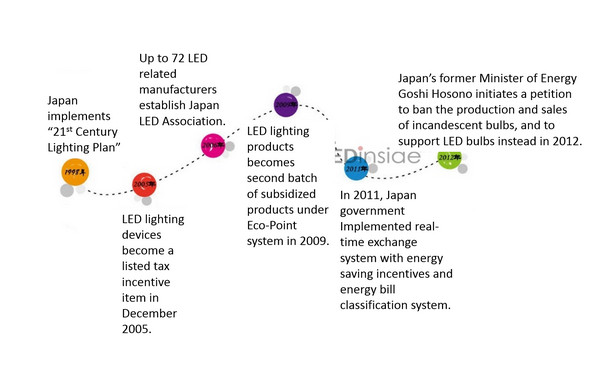 Japan became a signatory of the Minamata Convention on Mercury in 2013, but has not ratified the convention yet. Ahead of ratifying the convention, Japan’s Ministry of Environment submitted a proposal to the Diet that urged banning of batteries and fluorescent lights that contained mercury on February 2015. Once 50 countries ratify the convention, it will become effective in 2016, and is expected to present new business opportunities for the UV LED sector.By 2020, Japan’s LED lighting market penetration is expected to reach 70%, and estimated to cut the nation’s total energy consumption by 7%, equivalent to reducing energy bills by approximately 1 trillion Japanese Yen (US $8.4 billion), according to 2014 Nobel Physics Prize Laureates Isamu Akasaki and Hiroshi Amano. However, to achieve this target LED production costs will need to be slashed to a fifth of current costs.India

India’s LED industry had a much later start compared to Japan. The Indian LED market is still at an early stage, but the government policies have started to take effect. India’s LED lighting market value reached about US $100 million in 2012, but only consists 3% to 5% of its market share. The Indian government started to promote carbon reduction policies in October 2014, and is promoting replacing the nation’s 750 million incandescent bulbs with LEDs. 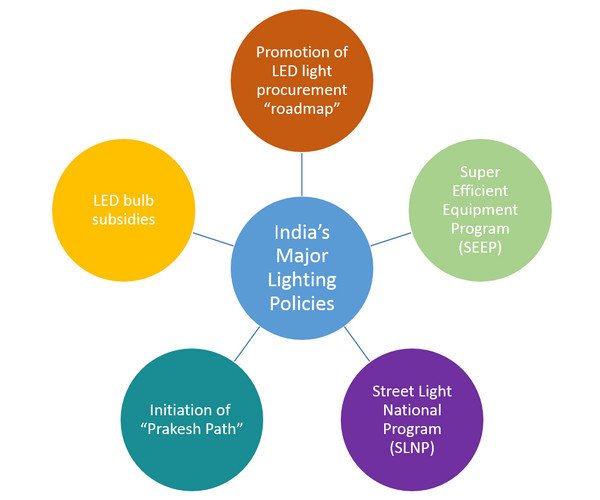 In early 2015, India Prime Minister Narendra Modi announced a series of lighting policies including installing LED lights in government buildings, streetlights and residential lighting. He also initiated LED residential and streetlight upgrade project “Prakesh Path”.India’s Press Information Bureau (PIB) announced in early 2015, the Bureau of Energy Efficiency under the Ministry of Power, India SSL and Energy Efficiency Services Limited (EESL) have jointly launched a LED lamp government procurement business model and “roadmap”.More than 302 government departments are participating in the procurement project. Over 186 Indian cities have joined the residential LED lighting replacement project, and are exploring plans to advance the transition promotion. As for public lighting sector, India plans to replace residential lighting and streetlights with LEDs in 100 cities by March 2019. Additionally, the government’s Super Efficient Equipment Program (SEEP) for LEDs aims to replace residential incandescent and fluorescent light bulbs with LEDs. The country’s Street Light National Program (SLNP) is targeting the overhaul of 35 million streetlights nationwide to cut energy consumption by 9 billion kilowatts, and conserved 15 megawatt’s of energy consumption through installed streetlights.Additionally, to lower reliance on LED imports, the Indian government has injected US $2.5 billion in two semiconductor subsidy programs including the ST Microelectronics Fab in Gujarat.Growing market demands and energy saving requirements has urged the Indian government to subsidize LED bulbs to stimulate consumer purchases in 2015. Indian cities and states including Chandigarh, Delhi, West Bengal, Maharashtra, Andhra Pradesh, Gujarat, Uttrakhand, Uttar Pradesh, and Punjab region have all implemented related measurements.Indian government promotions will make the local LED market more attractive to investors. Lighting energy consumption in India accounts for 20%, and the LED lighting market in 2015 will reach an estimated US $470 million, according to Gulshan Aghi, Honorary General Secretary of Indian Society of Lighting Engineers (ISLE) and CEO of Trilux India. Streetlights comprise of 60% of the total market value. Additionally, India’s LED lighting market is expected to reach US $2.2 billion by 2021, according to 6Wresearch research report.Malaysia
Malaysia has started to value environmental industries in recent years, with the aim of stimulating strong growth in green industries. Green lighting has become high on the industry development agenda. Malaysia’s LED lighting application industry is still in an early phase at the moment, due to its small size, there is still significant room for market growth.In 2015, Malaysia rolled out a nationwide LED lighting upgrade project which is expected to fully replace conventional lighting products, and is considered a significant environmental development in the country. Selangor and other Malaysian states have issued regulations that have made installation of LED light source compulsory in new buildings. The Malaysian government estimates by 2020 streetlights nationwide will be switched to LED. Rignt now only 5% of streetlights in Malaysia use LED light sources. Moreover, Penang government is welcoming Chinese LED manufacturers involvement in the project. The state government is offering five to 10 year tax free incentive to Chinese manufacturers establishing factories in the state, and is assisting these foreign investors in constructing bonded warehouses.To further promote LED lighting plans, the Malaysian government has gradually phased out or banned the usage of incandescent lamps or traditional luminaires in buildings or real estates in 2014. It can be projected there will be large future market demands. Currently, LED lighting used in Putrajaya administrative buildings energy savings have reached 50% per year.In recent years, the Malaysian government has invested largely in architecture and construction industries, which has led to growing product demands. Worth noting the government has initiated important and large infrastructure projects, notably the Klang Valley MRT system. Following constructions of the 11th Malaysian government project, the general construction market growth has sped up. In the next five years, major cities in Malaysia will be swapping all streetlights with LEDs. At the same time the Malaysian government proposed rural ecovillage developments, and its Third Industrial Master Plan (IMP3) whose main agenda is “strengthening the semiconductor industry” and “promoting innovative applications and technology”. The Malaysian government is spurring the entire LED industry supply chain value and market development.Benefiting from the government’s large scale support, the Malaysian LED lighting government has continued to rapid growth. LEDinside estimates LED market penetration rates in Malaysia will reach 35% by 2015.More News & Info:
Which Cree LED We Use? The Difference Between HID and LED.